Agricultural products and agricultural distribution are fundamental to human life. As a sector of the industry, agriculture supports not just the livelihoods of large proportions of the population, but also the economies of countries.

Historically, agriculture in Saudi Arabia was limited mostly to date farming and small-scale vegetable production in widely scattered oases. Small farms produced just enough food for local communities. However, with the support of government programs, the private sector developed exponentially to where it is now: looking to find agricultural self-sufficiency under the Kingdom’s 2030 vision. Some of these government incentives leading the change are:

With input and support from the government, the agricultural sector has grown, to sustain not only local demand for certain foods but also to export them to international markets. As a result, there has been phenomenal growth in the production of all basic foods. Saudi Arabia is now completely self-sufficient in the production of meat, milk, and eggs – from seeds and feed grains for livestock, all the way through to production and collection.

With increased exports in food production, there was a proportional decline in imports. At present, Saudi Arabia exports the following agricultural products regionally and internationally:

Over the past decade, agricultural systems within Saudi Arabia have been drastically upgraded and improved. Although Saudi Arabia is widely thought of as a dessert, it has regions where the climate has favored agriculture. Rainfall every year through the winter months averages about 100mm. Through the support of the government, in particular, large areas of desert have been converted into agricultural fields through large-scale irrigation projects, as well as by adopting mechanization practices.

While the Kingdom has attained self-sufficiency and even export of some products, it also produces large quantities of some of the following crops for local usage:

The Kingdom’s most dramatic agricultural accomplishment was its rapid shift from being an importer to becoming an exporter of wheat. In 1978, the country built its first grain silos. By 1984, it had become self-sufficient in wheat. Shortly thereafter, Saudi Arabia began exporting wheat to some thirty countries, including China and the former Soviet Union. According to a report from the U.S. Department of Agricultures’ Foreign Agricultural Service, wheat production in the Kingdom is currently estimated at 500,000 tons produced in 2018-19 and 700,000 tons expected in 2019-20. 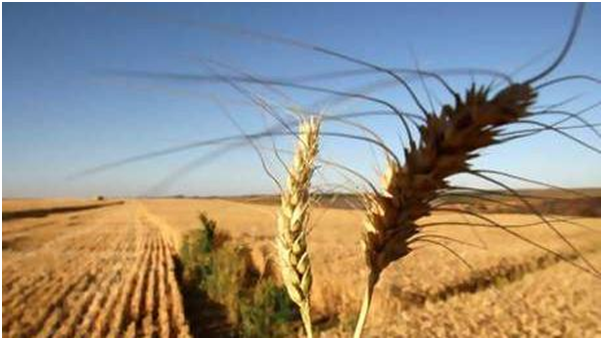 In addition, Saudi farmers also grow substantial amounts of other grains such as barley, sorghum, and millet. These not only meet some of the staple demands of the population but also form forage and food for the livestock industry, which is a huge export of the country.

Today, in the interest of preserving precious water resources, the production of wheat and other grains is being reduced for more sustainable agricultural practices, like the planting of fruits and vegetables.

By improving agricultural techniques and the roads that link farmers with urban consumers, Saudi Arabia has become a major exporter of fruits and vegetables to its neighboring countries.

Among its most productive crops are:

In the southwestern area of Jizan, for example, at the Al-Hikmah Research Station, where extensive and avant-garde irrigation processes are in practice, farmers are also producing tropical fruits including pineapples, paw-paws, bananas, mangoes, and guavas.

The progress made by the Saudi Arabian agricultural sector in recent years has been largely due to an array of government programs. These include:

The provision of soft, interest-free loans:

Institutions like the Agricultural Development Fund of Saudi Arabia (ADF) were founded by royal decree to facilitate and encourage the growth of agriculture in the Kingdom, back in 1962. The main purpose of the ADF to date is to finance agricultural activities in Saudi Arabia by providing loans to farmers. Since its establishment 57 years ago, the ADF has paid an approximate $8.8bn to support emerging and small farmers. In 2018 alone, the ADF allocated an amount of $800m to promote the sustainable rural development program of Saudi Arabia.

The government has introduced farming practices and encouraged the adoption of sustainable agricultural concepts, educating the farming community to use natural resources, including water, with sustainable mindfulness, as well as facilitated the mechanization and automation of agricultural units and farms across the Kingdom.

The government has most recently approved financial support for the environment, water, and agriculture sectors worth SR92 billion to help the country meet its goals under the government’s 2030 Economic Plan for self-sustenance. These initiatives have also facilitated farmers with electrical subsidies and occasionally free water for agri use.

The introduction of incentive packages for agritech, including imports of agri fertilizers and stronger GMO seeds, among others, has helped incentivize farmers.

Foreign agricultural, joint-venture partners of Saudi individuals or companies are exempt from paying taxes for a period of up to 10 years, and the investment regulations in effect since April 2000, offer further incentives. This has facilitated the growth of the agricultural sector by attracting foreign interest to help the industry grow.

Research and assistance to farmers:

The primary agency responsible for implementing agricultural policy is the Ministry of Agriculture, which provides research and extensive assistance to farmers. Equally, the Grain Silos and Flour Mills Organization, established in 1972, has grown considerably in its role in actively purchasing and storing wheat, constructing flour mills, and producing animal feed to support the nationwide growth of agriculture. To raise farm productivity, the government also funds and supports research projects aimed at producing new food crops to increase harvest and develop plant strains with greater resistance to pests. These programs are conducted in cooperation between local farmers and scientists at agricultural research facilities at Saudi Arabian universities and colleges.

Introduced back in 1968, the land distribution and reclamation program aim at distributing fallow land free of charge, mostly in small plots, as a means of increasing the area under cultivation and encouraging crop and livestock production. The beneficiaries are required to develop a minimum of one-quarter of the land surface within two to five years of beginning to till it. Upon compliance, full ownership of the land is transferred to the farmer.

The government continues to assist new farmers in implementing capital-intensive projects with special emphasis on diversification and greater efficiency.

As a desert country with no permanent rivers or lakes and very little rainfall, water in Saudi Arabia is a valuable and scarce resource. With the country’s rapid growth, the demand for water is increasing. To meet this growing demand, Saudi Arabia has turned towards innovative ways to support agriculture with irrigation water. 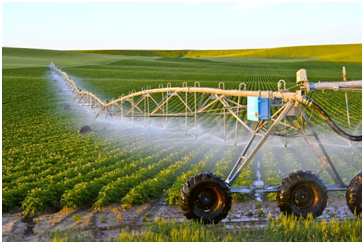 Vast underground reservoirs of water, called aquifers, are a major source of water in Saudi Arabia. In the 1970s, the government undertook extensive efforts to locate and map aquifers across the country and estimate their capacity. As a result, tens of thousands of deep tube wells were drilled in the most promising areas, for both urban and agricultural consumption.

Another major source of water is the sea, made available for use through extensive desalination processes that produce potable water from brackish seawater. As the world’s largest producer of desalinated water, the government body, Saline Water Conversion Corporation (SWCC) operates 27 desalination stations, that produce more than three million cubic meters a day of portable water. These plants provide more than 70 percent of the water used in cities and meet a sizeable portion of industry needs. They are also a major source of electric power generation.

Dams are used to capture surface water after frequent flash floods. More than 200 dams collect an estimated 16 billion cubic feet of runoff water, annually in their reservoirs. Some of the largest of these dams are located in the Wadi Jizan, Wadi Fatima, Wadi Bisha, and Najran. This water is used primarily for agriculture and is distributed through thousands of miles of irrigation canals and ditches, to vast tracts of fertile land that were previously fallow.

Another increasing source of water for use across irrigation is recycled water. The Kingdom aims to recycle as much as 40 percent of the water used for domestic purposes. To this end, recycling plants have been built in Riyadh, Jeddah, and other major urban industrial centers. Recycled water is used for the irrigation of farm fields and urban parks.

These agricultural transformations have considerably helped agriculture grow in the Kingdom, thereby altering the country’s traditional diet by supplying a diversity of local foods unimaginable a few generations ago. Dates are no longer the vital staple for Saudi Arabians that they were in the past, although they still constitute an important supplementary food.

Owing to Vision 2030, Saudi Arabia’s most ambitious agricultural accomplishment is its complete self-sufficiency and even transformation in status – from importer to exporter of basic foods. 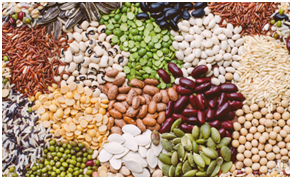 Other trends in agriculture are:

The use of hybrid seeds for vegetables such as onion, melon (watermelon and sweet melon), tomato, and carrot seeds, is becoming an increasing trend. Equally, premium potato seeds, high-quality forage seeds such as Alfalfa, Rhodes grass, corn, sweet corn, sorghum for silage and hay, hybrid grain corn, among others are becoming common usage. These seeds have been modified and treated to be more pest and disease resistant while generating great yields.

Extensive use of farm machinery:

Increasing numbers of farmers are employing different types of automation techniques and farm machinery for land preparation, tillage, and harvesting. Pneumatic seed drills for field crops and vegetables, spreading, spraying equipment, harvesting, post-harvesting, and storage equipment among others are in popular use across farms.

Some of the specialized forms of farm machinery in use perform the following agricultural functions:

Labor and time-saving orchard equipment and power tools for faster, and more efficient maintenance of the orchards are now being widely used in Saudi agriculture.

Farming techniques are increasingly turning towards irrigation systems that are reliable and cost-effective. The systems are particularly suited to arid or semi-arid zones, where good water management is imperative.

Some of the irrigation systems in use include:

To find out more about agriculture in Saudi Arabia, the kinds of seeds being planted regionally to success, as well as gain more information on agricultural production and agricultural distribution across the country and regionally, visit the Agri page website, by clicking here.

Agri is one of Saudi Arabia’s leading suppliers of agricultural products and is one of the oldest and best-known agricultural trading houses in the region. The company has also been a pioneer in providing agricultural distribution solutions across the region – enabling growth and prosperity for farmers in the Kingdom.